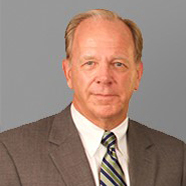 Mark has successfully defended in trial national beverage companies, domestic and foreign automobile manufacturers, and national pest control companies. As part of his product liability practice, he has also defended manufacturers of farm equipment, power tools, and household appliances in state and federal courts throughout Florida.

Originally from Pittsburgh, Pennsylvania, Mark earned a Bachelor of Science in Engineering from the United States Military Academy at West Point, a Masters of Science in Business Management from Troy State University, and his law degree from the University of Miami School of Law.

Prior to practicing law, Mark served in the military and later worked for Procter & Gamble, Lykes Brothers, and Ralston Purina in consumer products marketing and new product development.

Mark is a member of the International Association of Defense Counsel, an invitation-only association of corporate and defense attorneys, the Florida Defense Lawyers Association and the Defense Research Institute. He also served as a Judge with the Miami-Dade County Teen Court Program and is a former Director of the West Point Society of South Florida.